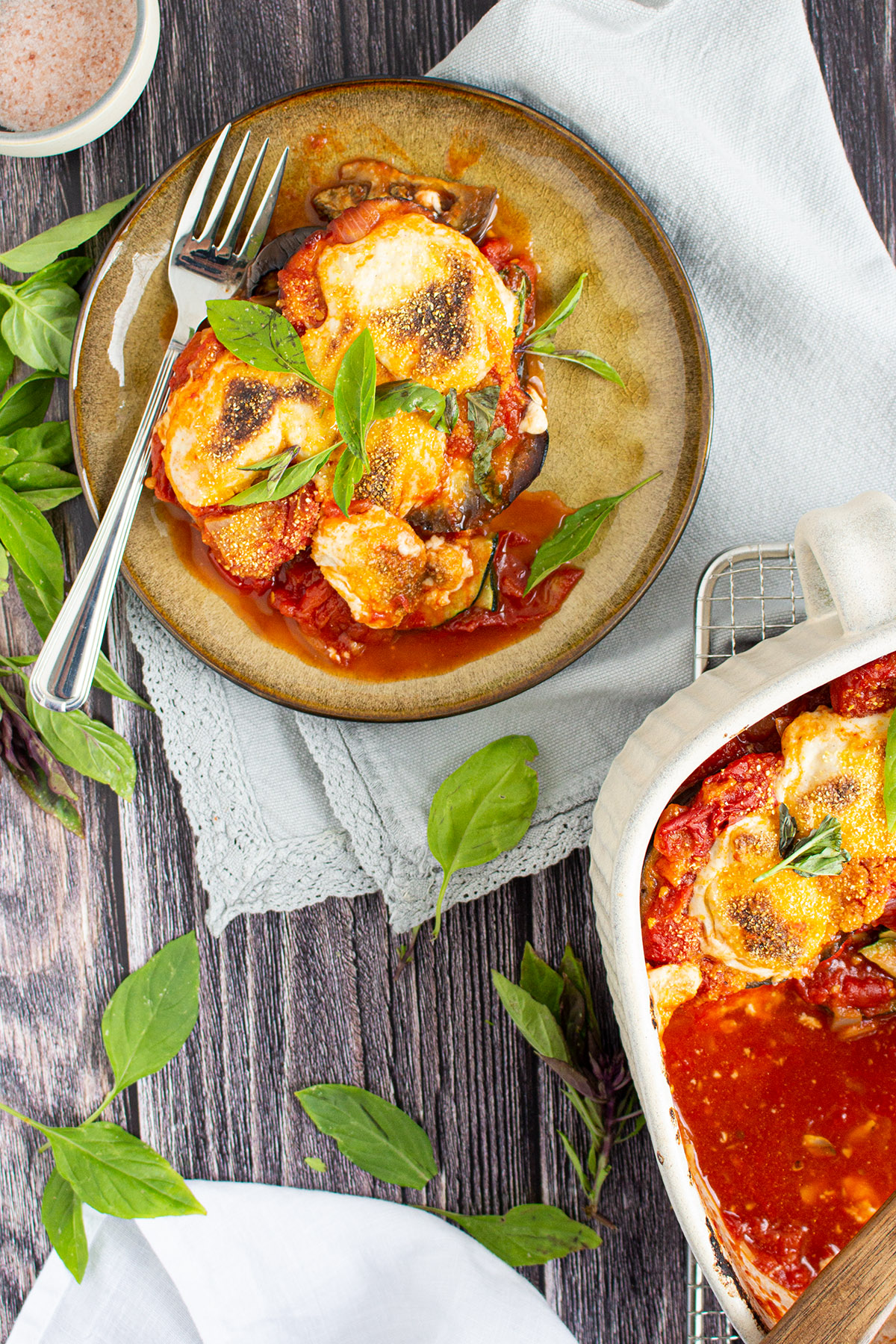 Sometimes there are days when vegan life or the plant-based diet are a little difficult. For example, when you long for a dish where actually need cheese for. Cheese is actually the only thing I miss from time to time since I went vegan. But that’s hover now. Why?

Yet, for a vegan eggplant Parmigiana (vegan aubergine bake) you need cheese, you probably think. Correct! I’m sure, many of you also used to love cheese and would gratinate everything that got in your way and eat it straight away. However, if you have consciously decided against the use of animal dairy products, you should of course stick to your principles as best you can.

Of course it is not the end of the world, if you occasionally become a vegetarian or eat some meat. At least everyone should be free to decide in that matter without having to justify themselves. But for all cheese fans who adhere to their no-animal products principle, this recipe is a very special one. Since I had started with Paleo, I thought I had to say goodbye to baked, deliciously melted cheese. When I used our cashew mozzarella for gratinating for the first time, it was so great to finally have this cheese-experience back. Bliss!

Gratinating with Cheese that is no real cheese at all?

Yes, it really works! Sure, the cashew mozzarella isn’t as stringy as normal mozzarella, when it comes out freshy out of the oven. But it turns nice and soft and at least A LITTLE stringy. Even Wolfgang found that baked cashew mozzarella was very, very tasty, and worthy of being called an official cheese replacement. He is my impartial judge. Every now and then he eats normal cheese and has not completely forgotten its taste, as I probably have.

Eggplant Parmigiana or Melanzane alla Parmigiana, as this delicious traditional Italian dish is also called, usually contains parmesan and sometimes boiled egg. Neither is going to be used in this recipe, of course. Here a fine, homemade – but don’t worry – super-fast tomato sauce is prepared as a basis, aubergine and zucchini slices are grilled and seasoned with salt and pepper only. You have to prepare the cashew mozzarella BEFORE as the cashew nuts have to soak overnight and the mozzarella itself has to be cooled for 1-2 hours until it has the desired consistency.

Soon the time will be up: We publish our first E-Book for you!

Hopefully we’ll make it this summer. I am currently planning a vegan basic recipe book. All instructions for vegan basic ingredients will be in one place! Cooking plant-based is fine BUT it also has to be practical. Practicability is the No. 1 requirement if you want to fully integrate this into your everyday life.

By the way, while we are talking about practicability. You can perfectly prepare the cashew mozzarella at the weekend when you have a little more time. You can store it in a mason jar for 4 days in the fridge. Below, I’ve compiled all instructions you need and the link to the mason jars, which we always use.

These are the mason jars in which we store the cashew cheese:

I’ve been asked what kind of blender we use. Here you find the new model of the one we blend almost everything with. The price and the functions are the same.

But now, enough talk, let’s go into the kitchen 🙂

Curtain up for the vegan Aubergine Parmigiana!

Oh, and I almost forgot to say: If cashew mozzarella is as good for gratinating as normal mozzarella, you might already be imagining which Italian recipe with gratinated cheese is planned next. it’s name starts with P. I guess that’s all I have to say 😉

1. Wash the zucchini and eggplant, remove the ends and cut into 1 cm thick slices.
2. Peel onions and garlic, dice finely. Wash the tomatoes and roughly dice them, too.
3. Braise onions and garlic in a little oil. Add tomatoes and steam for 20 minutes, then add salt and pepper. Add the bay leaves and apple cider vinegar and simmer gently for another 20 minutes.
4. While the tomatoes are simmering, fry the aubergines and zucchini slices in a separate pan with 5-6 tablespoons of olive oil until both sides are lightly browned. Season with salt and pepper.
5. Now preheat the oven to 180°C/356°F top/bottom heat and line the casserole dish with a layer of zucchini and eggplant slices. Cover with 3-4 ladles of tomato sauce and spread a few tablespoons of mozzarella on top. Now start the next layer with zucchini and aubergines and continue until the baking dish is full or the ingredients are used up. The last layer should be finished with mozzarella and then sprinkle it with some polenta semolina.
6. Bake for about 20 minutes, until the cheese has melted a little and is golden brown. You may also take it out of the oven earlier, if you like the cheese to be not too crusty. Enjoy 🙂

Important note: As you can see in the photo, we made the Parmigiana in a baking dish measuring 20×20 cm (8×8 inches). The ingredients were sufficient for this. A normal, oval baking dish could require a little more ingredients. In this case, just take a little more zucchini or aubergine and maybe take 1 kg of tomatoes instead of 800 g and ideally double the amount of mozzarella, then you are on the safe side. If some mozzarella is left over, it doesn’t matter, because you can have it the next day as Caprese with Wolfgang’s Farmer’s Bread 🙂

Here a similar version of the baking casserole we used for the vegan aubergine parmigiana.

(All external links in this post are affiliate links. If you buy something via these links, I get a small commission that I can use to cover some of the monthly costs for the blog.)